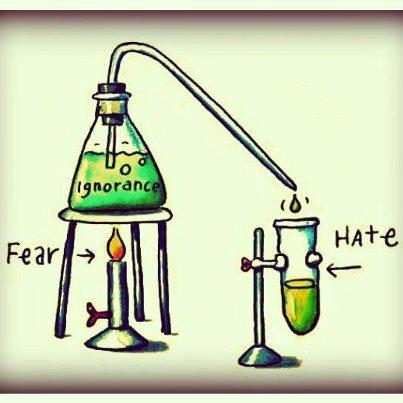 Media creates fear. They put each Muslim like in one bag, telling that everyone of them is a terrorist. They make people think Muslims are dangerous, morders and it's better to stay away of them. If someone doesn't have a contact with them may believe it.

The image of Islam in Europe was based on myths and fantastic imaginations. Media has a huge impact on public awereness. In the case of issues related to Islam media are often the only source of information about the religion and its followers.

Biased position of the media is reflected in the attitudes of society. Only a few individuals connoisseur of Islam, travellers, people with comprehensive knowledge are able to verify the information provided by the media. The remaining part of the population doesn't think about the truth of media coverage. The specificity of the journalist's work imposes on him the necessity of simplification of the message. The text of this article or content of information transmitted on the radio and television must attract the attention of the viewer/reader. In the other words, the information must be easy to sell.

Therefore, the media focused mainly on publicizing information about the fundamentalists belonging to terrorist organizations identifying them with the rest of Muslim society. Positive information about Islam appeares rare and usually they don't interests other people. The examples can be interviews with Christians living in Arabian countries.

Another example to show is interwiew with Algerian's archbishop- Henrie'm Tessierem entitled "Islam without the sword" (published in polish newspaper Gazeta Wyborcza). There is written that peaceful coexistence and talking between Islam and Christnity is possible. Articles and books also shows Islam and Muslims in objective way, talking about live of casual people, their problems and mores. It shows that medias don't always share real information, because they only want to arouse curiosity and interest.

This is a really great article. I agree with every word that you wrote and i fell in love with them. Danke.

The article makes a perfect point about the responsibility of the media to educate people about the current situation, and to do this while being objective.
I would recommend this to someone interested in the topic despite the occasional (and thus excuseable) mistakes.